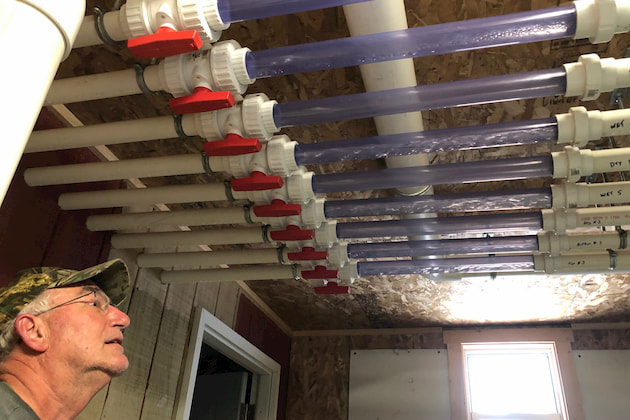 HARRISVILLE, N.H.—The season is turning around in a hurry, with big sap runs finishing out what had been a sluggish season and making it into a winner.

The Miners were coming to the end of their season during a tour for The Maple News on Saturday, April 6 and had broke 300 gallons of production for the first time in their sugaring career. 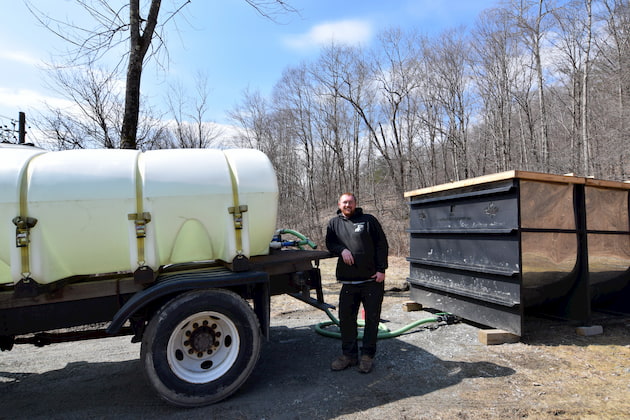 Season Update #7: Season catches up in a hurry

ELLENBURG CTR., N.Y.—The season is catching up fast, with an ocean of sap in the East this week.

Herfurth said she got 22,600 gallons of sap in 36 hours from Tuesday into Wednesday of this week.

Like many in the Northeast, Herfurth had earlier worried about the late start. But that’s all changed now. 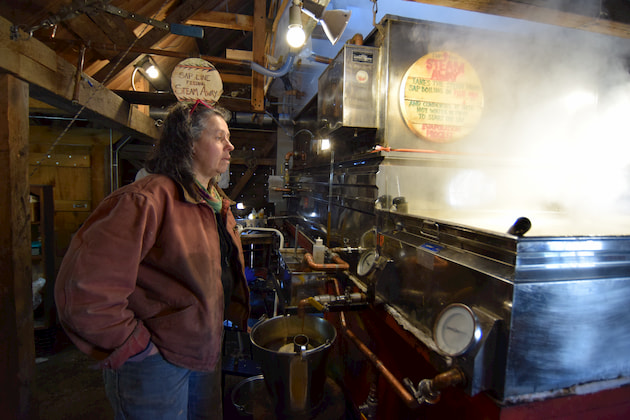 CADOTT, Wisc.—Sap was running everywhere this week, even in the Midwest which had barely started only a week ago.

“It’s running good here in some areas but the North is still a little slow,” said Peter Roth of Roth Sugar Bush in Cadott, Wisc.

Roth estimated he was at about 35 percent of a crop at his farm in Cadott, Wisc. as of this week.

Chris Ransom of Vadnais Heights, Minn. and president of the Minnesota Maple Producers Association said the season in his state was just starting to wake up after a harsh winter, but generally not too far off a typical start time for the season.

“At my place anyway, my average first sap run has been on about March 10 each year. This year it was the 15th so not much of a delay,” Ransom told the Maple News on Friday, March 29.

“I’d say we're at the beginning of the season and that most people are optimistic that the weather patterns are ‘textbook’ for sapping for the next week or so,” he said. [ MORE ] 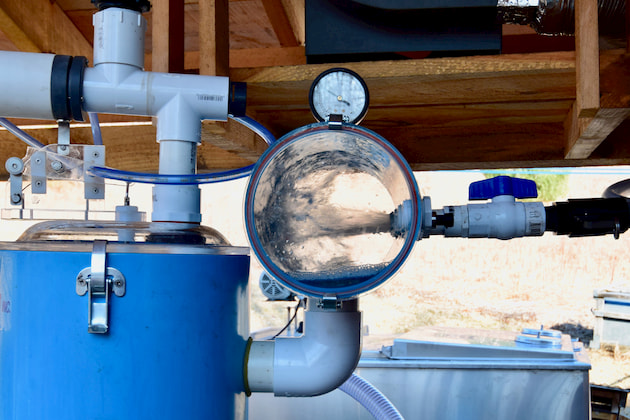 Season Update #5: The season comes alive for some, still a trickle for north

SUNDERLAND, Vt. — The season is finally opening up in the central strip of the Maple Belt, with some sugarmakers buried in sap this week.

“It’s going to run like crazy,” said sugarmaker Jim Hayden of Sunderland, Vt. as he was boiling on Tuesday, March 20.

And sure enough it did, with an ocean of sap coming in during the 50 degree day on Wednesday in central and southern Vermont and neighboring New York. Sap ran through the night and into Thursday. 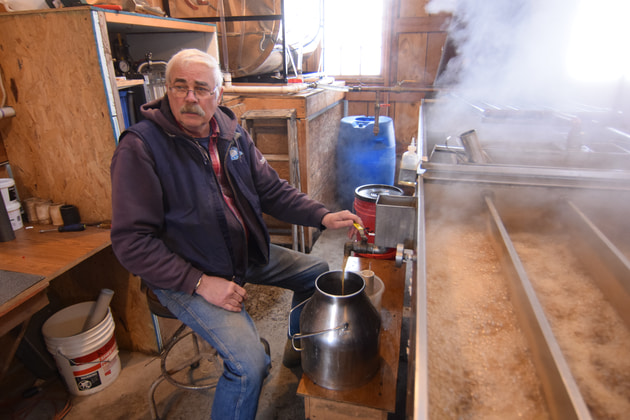 Season Update #4: Season slowly starts to wake up in Northeast

HARDWICK, N.J. — The season is just starting to wake up in the Northeast late this week, while others in the southern areas of the U.S. Maple Belt are on a record pace.

“I’ve boiled 13 times already,” said Tom Phillips, who is boiling off 1,041 taps in Hardwick, N.J. and enjoying his best season ever.

“This year has been perfect temperatures,” he said. “Here it warms up just enough to get a good run and then freezes up again.

Phillips said most of his crop so far has been lighter grades of syrup, a flip flop from the last two years when it was all dark.

“I’ve made 90 percent light so far,” Phillips said on Tuesday during a tour for The Maple News. [ MORE ] 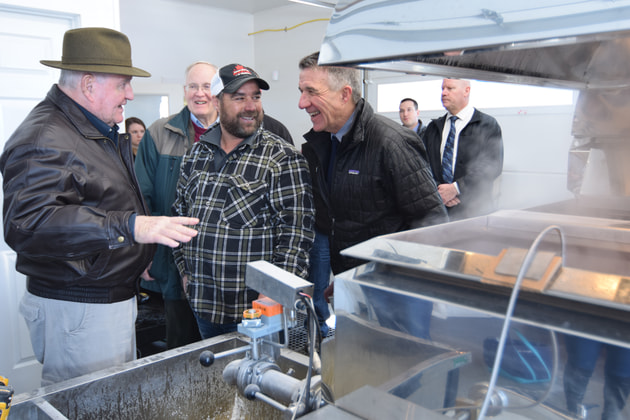 It was the first known visit of a sugarhouse by a U.S. agriculture secretary in modern history.

“What we saw here today was an experience here for me,” Perdue said. “I’ve never tapped a maple tree before.”

Perdue, who hails from the state of Georgia and is the former governor of that state, said he was impressed by the operation, owned by the Harrison Family and a showcase facility in the country’s biggest maple state.

“It was good to come and see a modern plant here,” the secretary said of the sugarhouse, which sits on a ledge at the base of Georgia Mountain. “I was blown away that Vermont produces half the syrup the U.S. consumes. I’m happy to be here during maple tapping season.” [ MORE ] 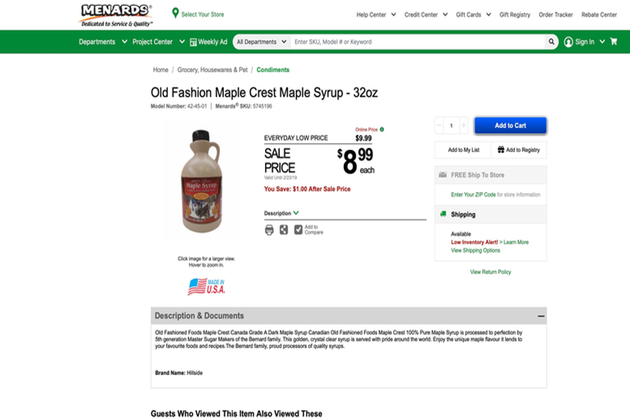 MENOMONIE, Wisc.—Sugarmaker Mark Casper said producers in Wisconsin were upset with an apparent mislabeling mixup by Midwest homestore megachain Menards, which was selling Canadian syrup on its website with a “Made in U.S.A.” banner.

As of last week, the superstore chain was advertising Canadian syrup from Bernard & Sons, one of the biggest packers in Quebec, as being “Made in the USA.” The store was selling quarts of the Bernard syrup on its site for $8.99.

The ad has since been changed, with the Made in U.S.A. tag removed. [ MORE ] 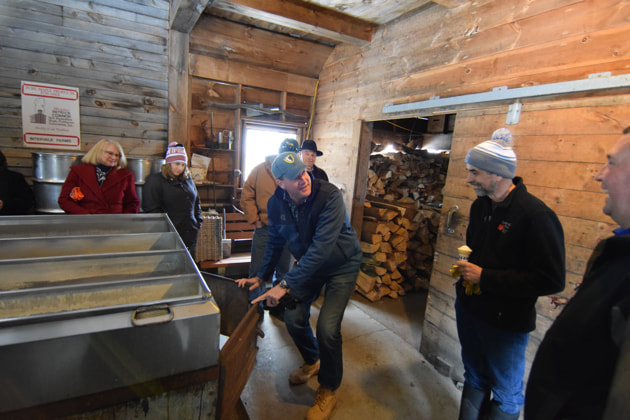 "We have those guys to the west who think they do it better than we do, but they don’t,” Sununu joked about neighboring Vermont, where the governor of that state plans to tap a ceremonial first tree on Friday at Georgia Mountain Maples in Fairfax, Vt.

Sununu spent more than an hour touring the Intervale facility in Henniker, N.H., visiting with owners Patrick and Melanie Connor and daughter Shelbie Connor who manages the dining room at the popular restaurant and sugarhouse.
[ MORE ]