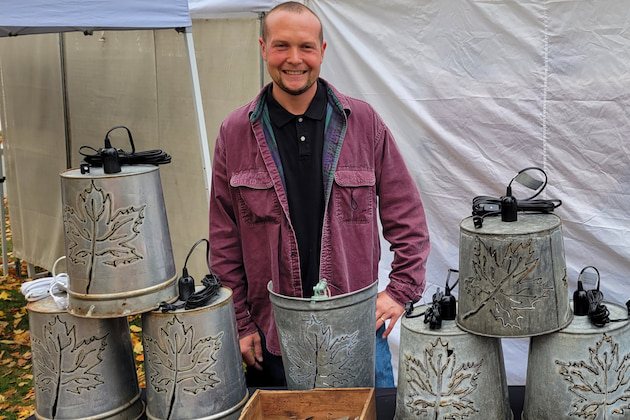 The Mount Holly, Vermont producer uses them to make unique maple leaf-designed lights that are selling like hotcakes, coast to coast, since he first introduced them last spring.

"The original intent was for people to dress up their sugarhouse or shed, but people have taken these things to a whole other level, decorating their homes," Karle said. "Hey, whatever it takes, I'm all for it. That's awesome. I've already been shipping them to people from California and down South."

Galvanized sap buckets are no longer used for sap collection in the industry on a commerical basis, and discouraged to be used by hobbists because they are not considered food-grade. [ MORE ] 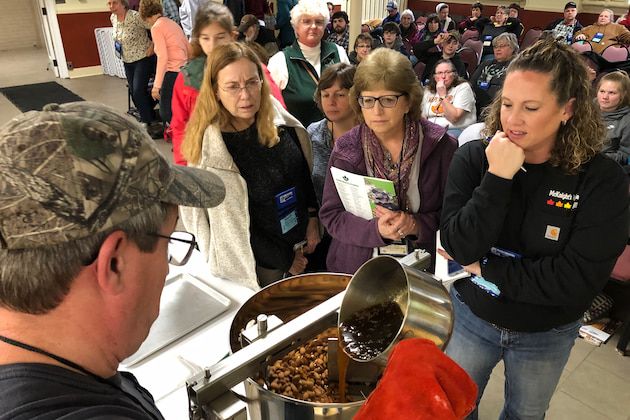 The biggest maple show in the industry will be coming back after a two-year absence on January 7-8, 2022 at the New York State Fairgrounds in Syracuse, N.Y.

The Board of Directors of the NYS Maple Producers’ Association met October 12 and decided that the Mid-Winter Classic conference, workshops and trade show will be safe to have in person this winter. 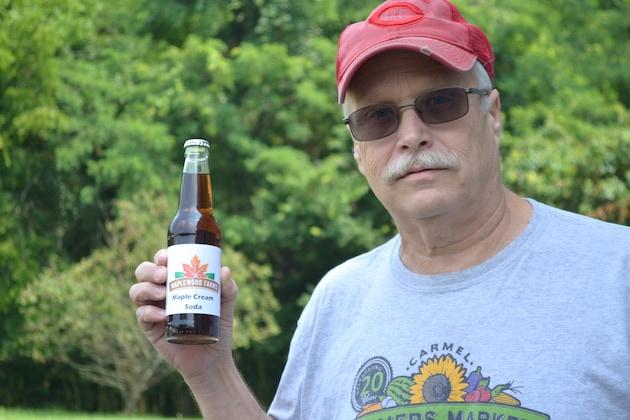 BROWNSVILLE, Ind.—Response at the Indiana State Fair could decide if a newly developed maple soda pop winds up on store shelves.

A maple syrup producer has teamed up with a craft beverage maker to create a recipe and gauging future prospects of the drink.

Hart is also President of the Indiana Maple Syrup Association.

Hart has been selling maple cream soda since the spring at farmers markets he works primarily in central Indiana. [ MORE ] 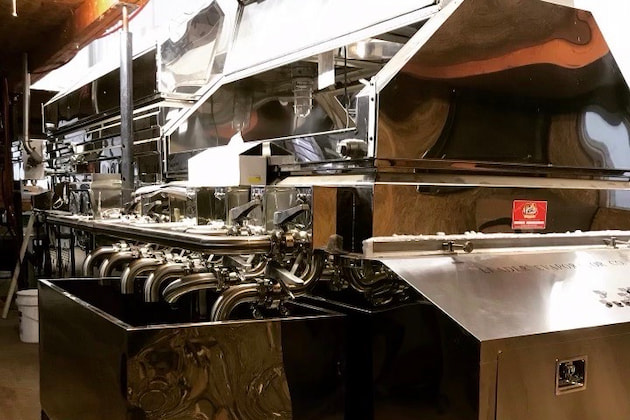 MERRILL, Wisc.—Great stuff if you can get it.

There’s nothing maple syrup makers shouldn’t like about using natural gas evaporators to boil down their sap unless it’s breaking from tradition.

Natural gas is much cheaper and easier to use than most other evaporator fuels and it’s always there whenever needed, said Joel Oelke, a Midwest Regional Salesperson for Leader Evaporator headquartered in Swanton, Vermont.

Oelke said evaporators running on natural gas are becoming more popular but holding back sales is lack of access to a pipeline carrying the cleaner burning fuel.

“A lot of sugarhouses are in remote locations where natural gas just isn’t available,” he said.

Oelke from his home office in Merrill, Wisconsin, is involved in sales for Leader Evaporator throughout the Midwest and as far east as New York and Pennsylvania. [ MORE ] 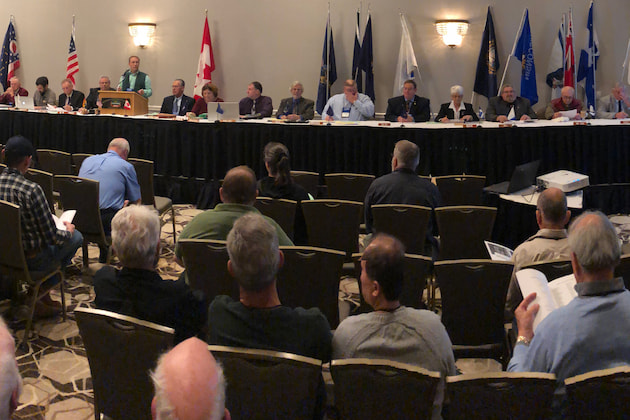 Fall maple conference in Niagara Falls is canceled due to Covid

SYRACUSE, N.Y.—Covid cancelations are back.

After two years of planning and preparation, the “Maple at the Falls” Niagara Falls NAMSC/IMSI meetings scheduled for late October, have been canceled.

The New York State Maple Producers’ Association said in an announcement Thursday that the planning group attempted nearly every avenue to make the meetings work and to ensure that they would be held. 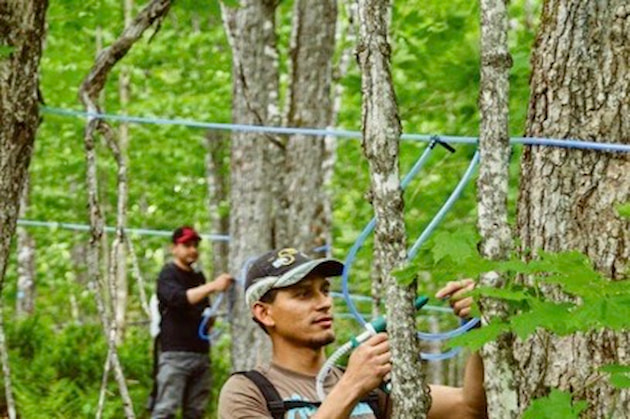 Quebec to add 7 million new taps instead of 3 million

LONGUEUIL, Que.—Quebec producers will be adding seven million new taps into their quota system by 2023, dramatically increasing an announced expansion from last month.

“We’re not trying to one-up anybody, we’re looking at it as a business,” said David Hall, a 25,000-tap producer from Cowansville, Que. and a director for the Quebec Maple Syrup Producers federation.

The federation had announced in June a three million tap expansion of its government sanctioned quota system.

But since then the federation hired an actuary to study its current syrup holdings against the marketplace and determined that by December the federation’s warehouses could drain to critically low levels, prompting the release of four million more taps.

Hall said that since the end of the 2021 season, U.S. bulk buyers have stepped up to buy 50 million pounds out of the federation's Global Strategic Reserve, which stockpiles surplus syrup from season to season.

By the end of the year, there could be only 40 million pounds left in the reserve of table grade syrup, Hall said. 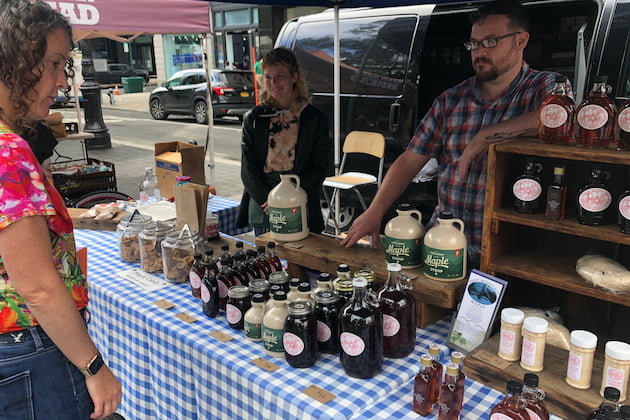 Consumers want to know what state their syrup is coming from, especially from Vermont

MONTPELIER, Vt.—Consumers are more like to buy maple if the state in which it was produced is identified on the label.

“Consumers really want to see the state branded on their product,” said researcher Matthew George of the Atlantic Corporation, a market research company hired by the Vermont agency of agriculture to study consumer preferences for maple and maple products.

More than 1,800 consumers were polled for their maple preferences in the Northeast-based study titled "Identifying Market Opportunities for Maple Syrup Producers in Vermont.”

More than 36 percent said the geographic origin of their syrup was “very important.”

The research focused on all aspects of maple marketing big and small and is available online at https://www.atlanticcorporation.com/vt-maple-dashboard
[ MORE ] 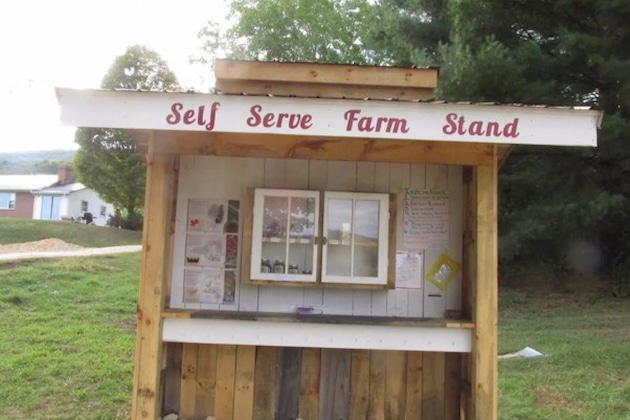 Sugarmakers raising their prices at the sugarhouse and the farm stand

It is following a trend for just about every consumer staple in the marketplace, from airline tickets to chicken cutlets.

“We upped our price in our gift shop to $75 a gallon,” said Ben Fisk of Fisk’s Maple Syrup in Temple, N.H. during the annual meeting of the New Hampshire Maple Producers Association last month. “We’ll see if it sells. It’s inflation.”

Fisk had been selling a gallon for $60.

At the same meeting, sugarmaker Charlie Hunt of Hunt’s Maple Syrup in Hillsborough, N.H. said he was going to raise his quart prices to $20 as soon as he got home. He was at $17. [ MORE ]