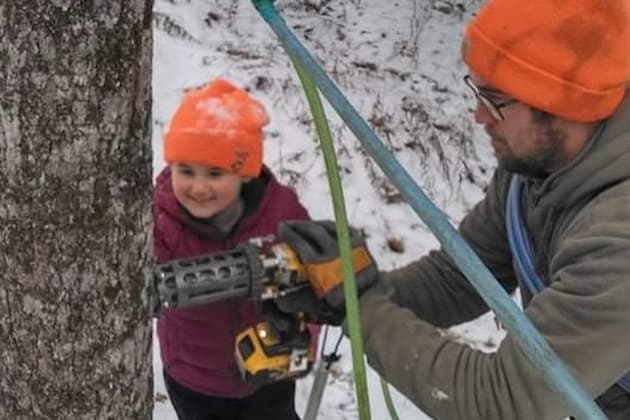 RANDOLPH, Vt.—The early tappers are at it again, getting a jumpstart on the 2022 season.

“We have made a little over 100 gallons so far off 1700 taps we put in the second week of December,” said Cody Armstrong of Randolph, Vt. who has earned a reputation for routinely getting out early with the drill.

Armstrong said his first boil was on Jan. 3, after collecting upwards of 10,000 gallons of sap during the thaws between Christmas and New Year’s.

Higher up in Vermont, Gary Corey of Corey’s Maple Orchard in Fairfield, Vt. also got out early. 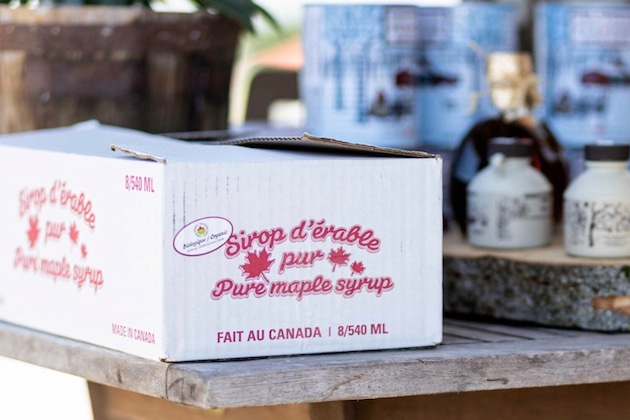 Quebec crop short but not a wipeout

LONGUEUIL, Que.—It’s official. A short crop in Quebec and the provincial governing body regulating maple may allot more taps to cover the shortfall.

The warm temperatures experienced across Québec in April brought about an unusual occurrence: all maple syrup producing regions saw their harvest seasons begin – and end prematurely – at the same time.

In April, federation officials said the reserve held 106 million pounds in barrels, some of which are from crops as far back as 10 years ago. [ MORE ] 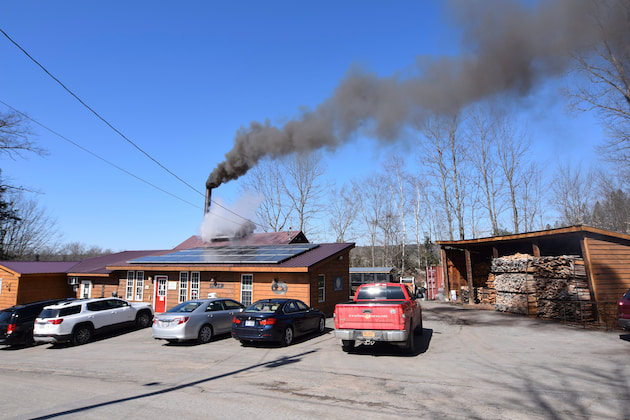 It's official. U.S. maple crop down somewhat for 2021, but not as bad as predicted

WASHINGTON, D.C.—It’s official. A lousy maple crop in the U.S. but maybe not as bad as first thought.

Sugarmakers in the U.S. made 3.42 million gallons of maple syrup this season, with Vermont leading the way, followed by New York and Maine, according to the National Agricultural Statistics Service, a branch of the USDA. 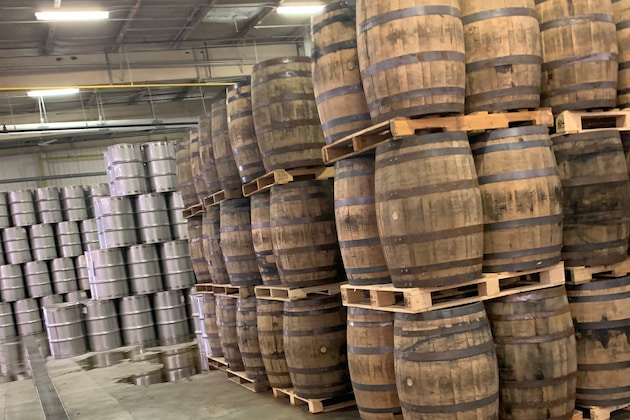 COWANSVILLE, Que.—Quebec’s crop is significantly down from last year but there’s still plenty of syrup in warehouses.

“We’re going to be 30 million pounds less than last year, is my educated guess,” said David Hall, a 21,000-tap producer in Cowansville, Que. and a director for the Federation of Quebec Maple Syrup Producers.

Even though the far eastern sugarbushes in the province were still producing late this week, most in Quebec had shut down due to high temperatures and a notoriously low sugar content in the sap, plaguing producers all season.

“Everybody got lots of sap but there just no sugar in it,” Hall said.

Hall squelched a rumor that the federation was scrambling an emergency meeting this week to discuss the short crop. In fact, he said there is still plenty of syrup in storage to satisfy the marketplace through the year.

“I don’t think there’s a whole lot of panic out there,” Hall said. “There’s lots of syrup. It’s possible the numbers could come in a little better when it’s all done.” [ MORE ] 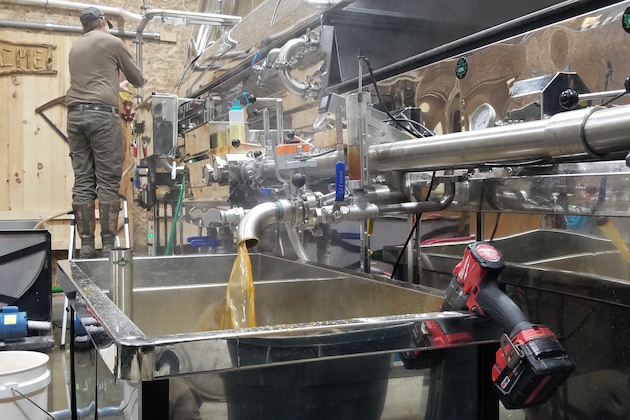 ALSTEAD, N.H.—With possibly the worst U.S. crop since at least 2012, bulk prices are jumping up this week.

“As of today, April 9, we have increased our field-run buy prices substantially to the producers,” said Bruce Bascom of Bascom Maple Farms in Alstead, N.H. in an announcement to The Maple News.

Producers who are certified organic will receive upwards of a 20 cent premium on top of that, Bascom said.

Other buyers are also bumping their buy prices this week.

Ben Fisk, president of Ben’s Pure Maple Products in Temple, N.H. also contacted The Maple News on Friday to announce he is looking for 1.5 million pounds of syrup. And will pay top dollar. [ MORE ] 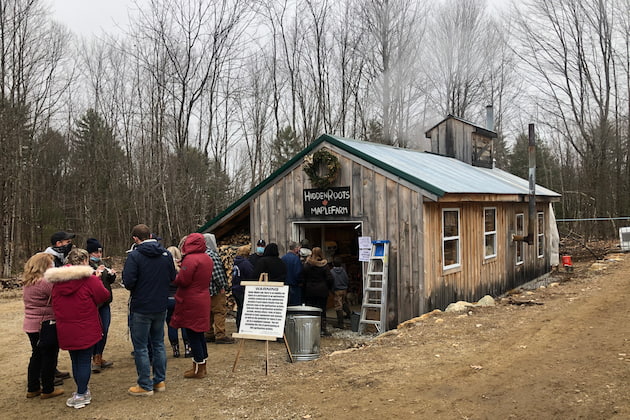 Season Update #7: Big crowds but not much sap in Maine; Northern Vt. is lagging too

LIMERICK, Maine—Not much sap but lots of visitors in Maine.

It was a big bust of a maple season for most in Maine, where sugarmakers were already pulling their taps.

“Not a great season,” said Aaron Carroll of Alderwood Farm in Limerick, Maine. “It was down quite a bit.”

Carroll said he made just 50 gallons off his 750 taps and pulled his taps on Sunday.

‘It was in the 60s all week here so we’re pretty much done,” he told The Maple News.

But what Carroll and other Maine sugarmakers lacked in production they made up for in tourists, with last weekend’s Maine Maple Sunday drawing massive crowds, with visitors filling long lines just to watch sugarmakers boil.

“We’ve sold out of everything,” said Nick Storer of Limerick, who with wife, Abbie and father Mike was busy Sunday entertaining a long line of tourists waiting to buy syrup and watch the Storers boil water since they were out of sap. [ MORE ] 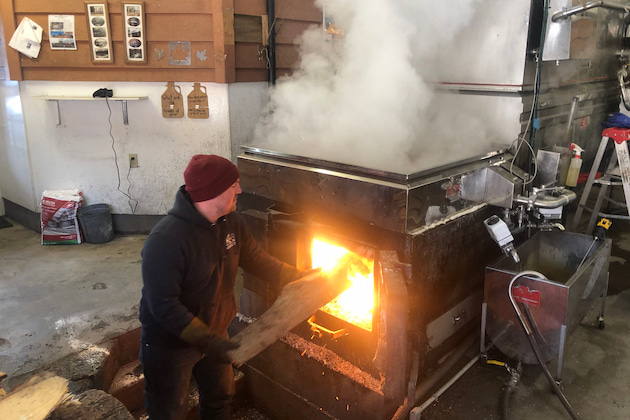 Season Update #6: Could be a disaster in the making for some in Northeast

JOHNSTOWN, N.Y.—Could be a disaster in the making.

Despite a big sap run over the weekend and into Monday, most sugarmakers in the heart of the central Maple Belt are way behind and fretting there may not be enough time to catch up. 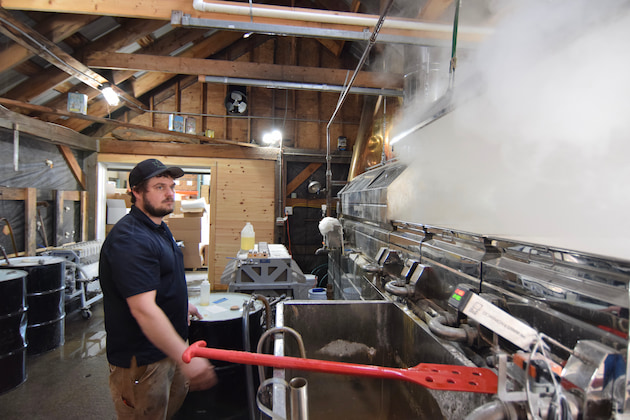 That’s the word from sugarmakers around New England who are just starting to fire up this week after a long winter with no thaws and not much sap.

‘It’s been wicked slow,” said Scott Kemp who makes syrup in Rindge, N.H. and has only made 15 gallons of syrup so far off his 800 taps.

At the tree tapping ceremony with New Hampshire Gov. Christopher Sununu at Connolly Bros. Dairy and Maple in Temple, N.H. on Friday, sugarmakers were all telling the same tale of woe.

Not much of a season so far and it’s already March 12.

“You better believe I’m worried, oh my goodness,” said Charlie Hunt who taps 3,000 in Hillsborough, N.H. “But we remain optimistic.”